You play as a space-ship and have to stay alive as long as you can, dodging or destroying asteroids. It's An arcade bullet-hell shooter! Nobody achieved 1 light-year score for the moment, it's the ultimate challenge.

There are three space ships :

Huge thanks those who made reviews and gameplays

For any video of this game, make sure to give the link in description and to say "made by tim krief". And hit me on twitter if you want me to share it.

Thank you very much!

Found a glitch.  If a player puts their computer into sleep mode, the game will continue to rack up points. Discovered when I closed my laptop in the middle of a run and then reopened it around 3 hours later to discover this screen. 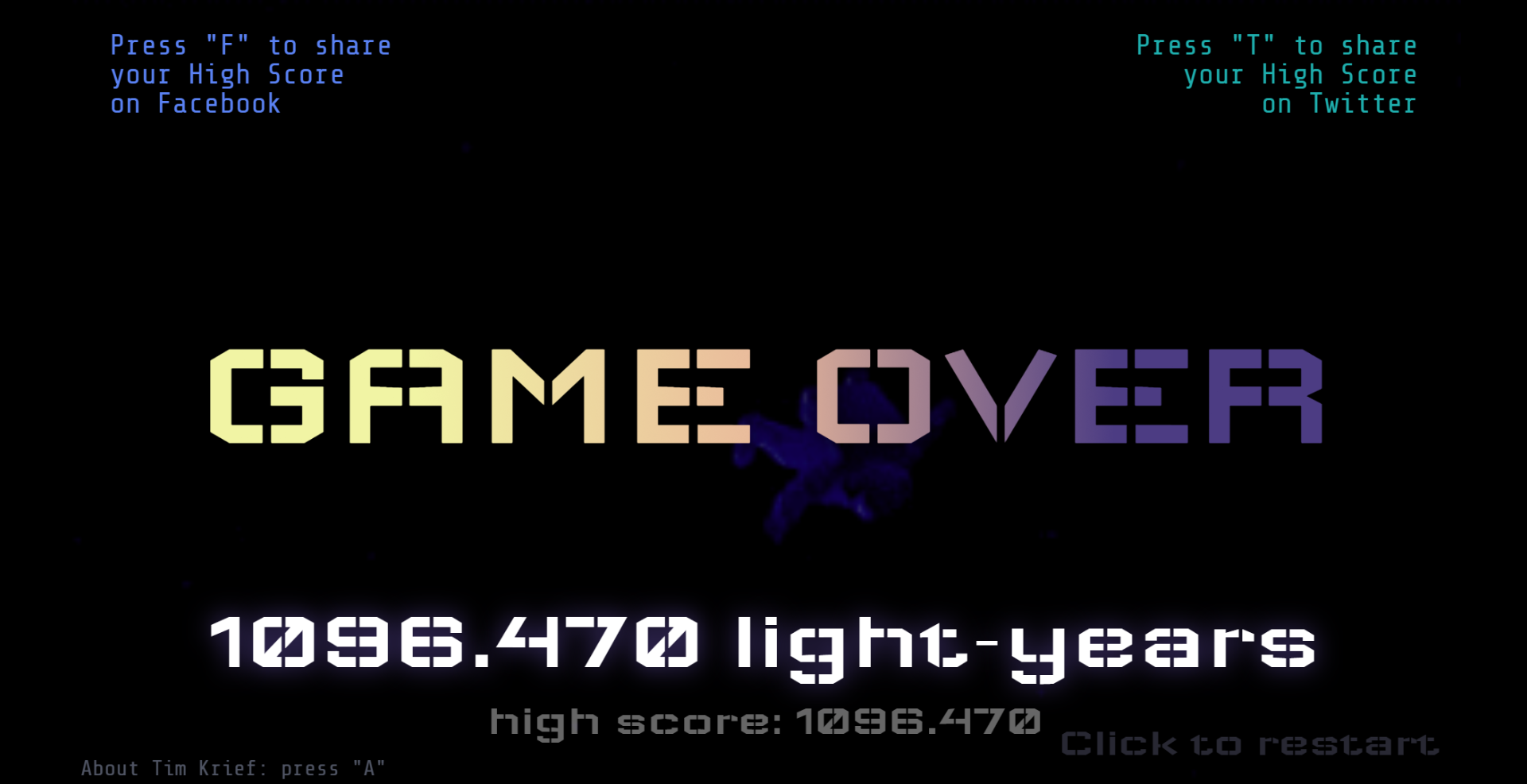 Thank you for reporting it. ;)

I made a video of this game. I thought there was a downloadable version of this, seeing as the Itch.io client allowed me to install it. But since there isn't a downloadable version, I guess my complaining about clicking out of the game may have been pointless. But I guess you can use this as a reminder to make the game fullscreen if you do make it downloadable.

Hello ! It's a browser only game for the moment but I'm planning to make it into an app ;)

Well, if you install the game with the Itch.io client, like I did, then you can play it non-browsered.

Hi! I seem to have the record in "Lost in Space" for now, I've skipped trough your playlist and nobody had the record above 0.5 light years. I have 0.586, watch if you don't believe me. If you do, watch anyway ;-P.

This game is clearly one of my favorites now. It's just the way I like it - minimalistic style, great music, etc.

However there are two things I'm not as confortable with. First, the sudden change of gameplay - once you're at ~0.35+ you're forced to change your style of playing from dodging to considering whether and where you shoot or tank damage thoughtfully.

Second, I have real doubts that it is possible for a human being to beat 1 light year without really lucky RNG, here's why:

The time a human brain requires to convert the eye's signal to the actual image is 0.100 s. I've seen this confirmed in multiple sources, e.g. in the NatGeo's show "Brain Games". Audio signals are processed without a noticeable delay. You may try it yourself - just make a 30 fps video project, and cut some stuff exactly to the beat, watch the result and then move the audio 0.1s into the past. Watch the second result and you'll surely notice the difference.

The average react speed (Seeing a visual impulse, usually a color change, and clicking as fast as you can) is stated (different sources state differently) around 0.225s and that's just one simple reaction you're waiting to do. I can easily imagine that it takes about 0.3s to 0.4s to partially/fully analyze the patterns coming in "Lost in Space" and react to them.

That's the only part of gameplay I don't like in this game (as well as in any other game ever) because the difficulty is increased not by making the technical challenge harder but just making it go faster instead. Ok, well, your game does both which is making things even worse.

What I'm saying is, that I spent hours to get a better high score and there have been plenty of moments when I was doing good,almost beating my high score, 80%-100% energy and then a bunch of asteroids came at a speed I never could realize fast enough and it just insta-killed me.

This sort of things tend to frustrate players making them go to the game's page and writing terrabytes of plain text data complaining about this one tiny detail nobody actually cares about.

I am not saying that the speed should be constant, it's good if it changes after the beginning, I just don't like impossible speeds that much.

I hope you may reconsider your game's machanics based on this comment and that It didn't bother you too much reading this whole thing that's almost as long as this game.

I added your video to the playlist.

Thank you for your comment. I agree with what you said. The speed must be topped. My idea is to create new obstacles for my game (not just asteroids) that will appear at some point (with different mechanics) to increase the difficulty. As long as those obstacles are not implemented, this speed mechanism make sure everyone dies at some point ^^. I will continue to develop this game in the future, but I like to work on other projects too. (And unfortunately, my spare time is limited...)

(Congratulation, I think you even beaten my own score)

Thanks and good to know. *(thumbs up)

(Unrelated to this topic, what is that theme that you use for your top bar? Looks really cool!)

Oh, wait, my fault. I've seen one of your videos where you record the whole screen and thought you were using Gnome on LInux, the top bar on your mac looks almost same. Nvm.

Ahah, I don't use a mac. I use elementaryOS with the ArcOSX theme ;)

I loved everything about the game! The  graphics, the design, the music, everything is just amazing and so great!

A very fun and addictive game! You will find yourself playing it again and again to get a higher score! Just a tip: Hit space bar to go faster and not lose energy! ;)  GREAT GAME! 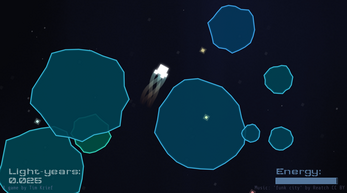 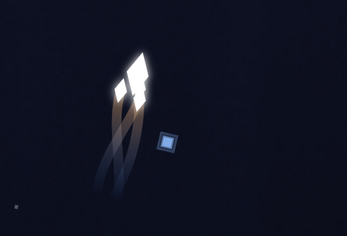